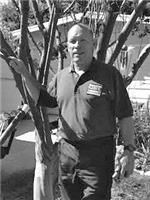 ABOUT
Taft Charter High School
Scott Douglas Ninegar passed away on October 23, as a result of a brief but intense battle with a very rare form of encephalitis. Born in Van Nuys, CA on October 29th, 1947 he spent 3 years growing up on a chicken ranch in Reseda before settling in Woodland Hills.

He was a graduate of Taft High School (1965). He received his Bachelor's degree in Economics at UC Santa Barbara in 1969 and a Masters degree in Finance from Cal State Northridge in 1972.

While in grad school he took a job as an intern at Hughes Corp. (1971-1974) where he taught himself COBOL and launched a career in programming for business systems. In 1974 he moved to TRW Space and Electronics group where he spent 20 years at the Space Park campus in Redondo Beach. He was a member of the track club and played for 10 years on the infamous "Chumps" team in the corporate softball league.

In 1994, Scott left TRW for a brief 4 years to work for the J. Paul Getty Trust as an IT Director and was instrumental in moving the Trust from the Santa Monica site to the Bel Aire campus. He returned to TRW in 1998 and immediately engaged as a member of the transition team as TRW was acquired by Northrop Grumman. He remained at Space Park, most notably R3, as an IT Director until his retirement in 2007. He then returned promptly as a consultant for another two years.

Scott was a member and frequent officer of the Los Angeles Rugby Club for over 30 years, finally retiring from his position of Fly Half at 60. He continued to play softball in the Manhattan Beach Parks and Recreation league until he was 68. He was a 40 year finisher of the Hometown 10k and spent the last decade working on the race committee, most often at the finish line. He was a marathon runner and completed several pier-to-pier swims. He was an avid golfer and up until his hospitalization he was walking 18 holes several times a week. During the COVID shutdown, Scott became a yoga instructor leading zoom classes three times a week for his friends and family members.

Scott was a Neighborhood Watch Block Captain, a Red Cross certified CPR instructor, and a member of the Manhattan Beach CERT (Community Emergency Response Team); serving on the Board of Directors for the last 2 years. He loved to hang out at the fire station and take the occasional ride in the truck as a volunteer with the paramedics.

Scott is survived by his wife, Kristi, his son Charlie, his daughter Melissa, and 5 grandchildren. A beach casual happy hour will be held to commemorate his life on Friday, December 17 at the Neptunian Woman's Club in Manhattan Beach from 4-7 PM. All vaccinated friends, neighbors and coworkers are welcome to join the family as we eat, drink and remember one helluva guy!
Published by The Beach Reporter on Nov. 4, 2021.
To plant trees in memory, please visit the Sympathy Store.
MEMORIAL EVENTS
To offer your sympathy during this difficult time, you can now have memorial trees planted in a National Forest in memory of your loved one.
MAKE A DONATION
MEMORIES & CONDOLENCES
1 Entry
Dear Kristi, Charlie and Melissa, I´m still stunned about the loss of Scott. I first met Scott in 2019 when I became the city council rep to the CERT board and Neighborhood Watch. We had monthly in-person board meetings for both groups before Covid moved us to Zoom. I´m glad I got to know Scott´s quiet strength in person before moving to virtual. Scott exuded competence and confidence without a trace of insecurity or needing to look busy or important. And he was selfless. His work as a NW area coordinator, key driver of MB´s Map Your Neighborhood, CPR instructor, and especially his online yoga classes (!) all demonstrate a love for his fellow human beings. I hope to live a life like Scott´s where I´m remembered as fondly. I´m blessed to have known Scott even if for only a short time. I´m wrecked for all of you, especially given the speed of events. May the God of peace comfort and sustain you. Warmly, Suzanne Hadley
Suzanne Hadley
Work
November 4, 2021
Showing 1 - 1 of 1 results