It is with great sadness that we announce the passing of Samuel Reece.

Sam was born in Wilmington, CA where he was a Straight-A student at Banning High School. Sam was the Student Body President and excelled at football and baseball. Sam graduated from Claremont Men's College with a B.A. in Literature and earned his Juris Doctorate from UC Berkeley School of Law. Sam was a star athlete at Claremont Men's in football and baseball, and he was a Rhodes Scholar finalist. He was inducted into the CMS Hall of Fame in 1996. Sam's love of the CMC athletic program, his deep respect for the CMC literature professors, and his desire to promote student diversity kept him involved with the college throughout his life.

Sam practiced law as a litigator and later in life focused on writing a memoir entitled The Adventures of Babe Wright.

Sam was a fierce advocate for his three children and his love and devotion will be greatly missed. He loved to coach his sons in baseball and is remembered for his dramatic readings of scary Halloween stories. Sam was creative, had a great sense of humor and an infectious laugh.

Sam is predeceased by his parents Lloyd and Stella and two of his sisters, Aloma and Maxine. He is survived by his three children, Justin (Amy), Sarah (Chris), and Morgan, his wife Judith, six siblings; including the youngest, Deborah (Alex) and John (Renee), who provided loving support throughout Sam's life, nephews and nieces and Sam's first grandchild, born to Justin and Amy on December 13, Peter Joseph Samuel Reece.

A memorial celebration of Sam's life will be announced in early 2022.
Published by The Beach Reporter on Jan. 6, 2022.
To plant trees in memory, please visit the Sympathy Store.
MEMORIAL EVENTS
To offer your sympathy during this difficult time, you can now have memorial trees planted in a National Forest in memory of your loved one.
MAKE A DONATION
MEMORIES & CONDOLENCES
22 Entries
Sam was a very special bright light...he lit up every place he was...he energy and laughter was like no other. He is and will remain to be one of my most favorite people I have ever known. My love and thoughts go out to his family and loved ones. Love you Sam Reece..may you rest well with the angels in the heavens. ( Im sure my dad is happy to see you! )
Sandra Zinda
Other
January 14, 2022
Sam was special! Every time he saw me, he gave me that special smile and a big bear hug with a kiss on my cheek...a very loving connection I will always cherish! He had a gift of expressing himself, which I witnessed when his championship team had a gathering in the coaches upper suite, giving a wonderful dissertation with bodily emphasis. To me, coming from Hawaii, he showed the importance of sharing our feelings of acceptance of everyone. We all benefited from Sam's presence, and to me he was and always will be MR. CMC! Wish I had played football with Sam.....Wishing Sam and his entire family and friends God's Blessings.
John Devereux '57
School
January 13, 2022
Huge thank you to the family for allowing us to express our love for Sam. Like all the participants, I had many personal moments and felt a special connection. We hiked many miles in Sequoia during his time as a ranger and spent so many hours together. He was always the first person I would look for at reunions. The football team was an important community at CMC, but about two weeks ago we held a dorm remembrance call, and it was apparent that Sam touched everyone in the dorm, regardless of their interests or backgrounds. We all saw how he attracted attention, but was even better at paying attention to others. Sam's curiosity and hunger for knowledge was incredible, and though I hadn't met any of you before last night, I felt like I knew you through his stories. He had so much pride and admiration for his family members.
Dave Beck
School
January 13, 2022
My first cousin, Sam Reece, will be missed for all that he gave to family. A loving, funny, and thoughtful man who did his best to bring joy to this world. Love and prayers for his family. I will miss his laugh and his smile.
Lorelei Saneto
Family
January 13, 2022 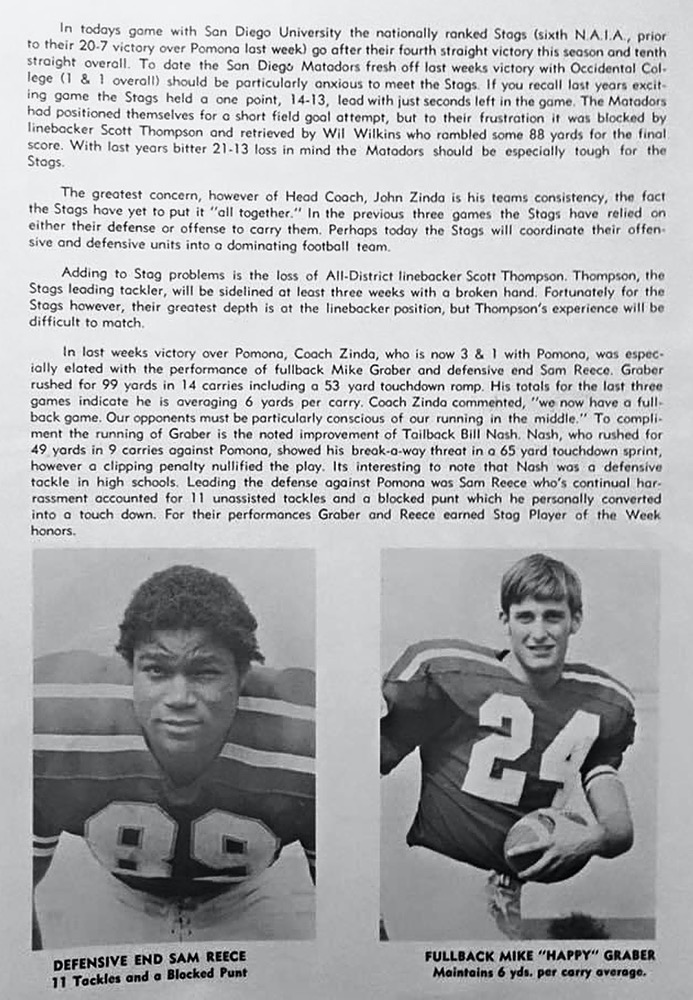 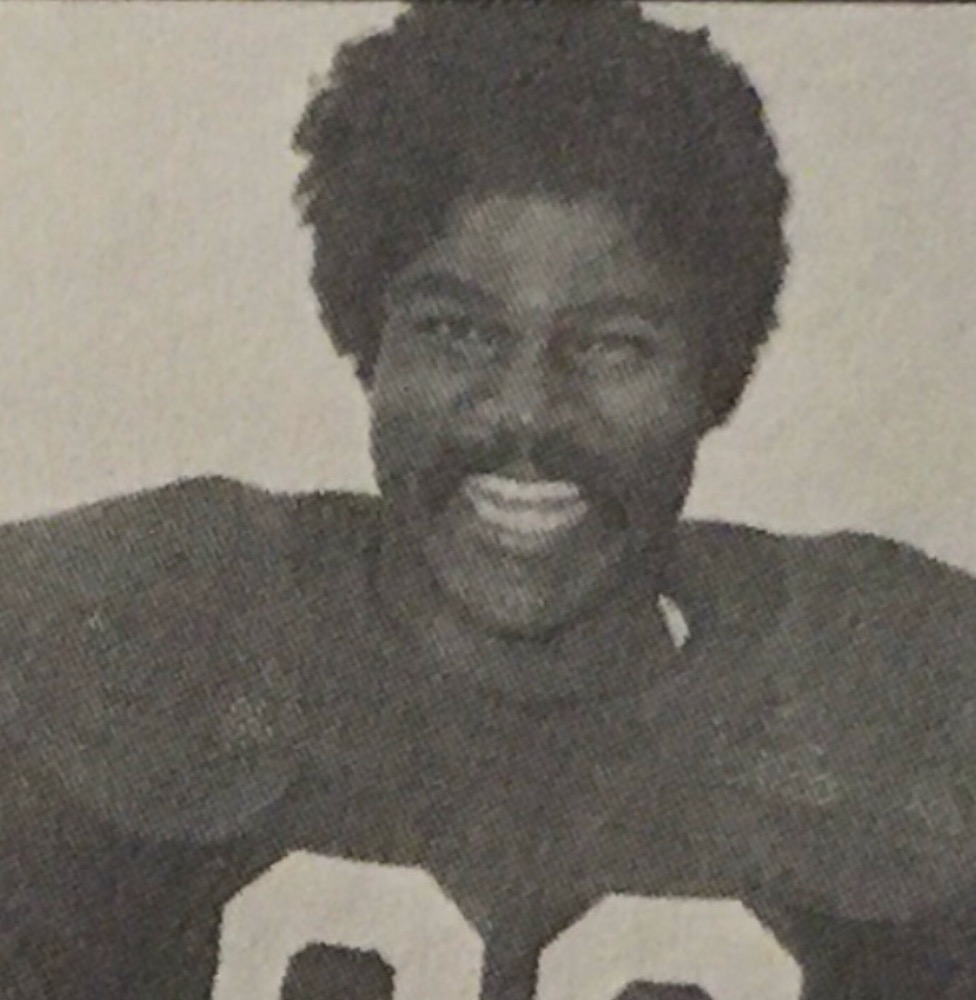 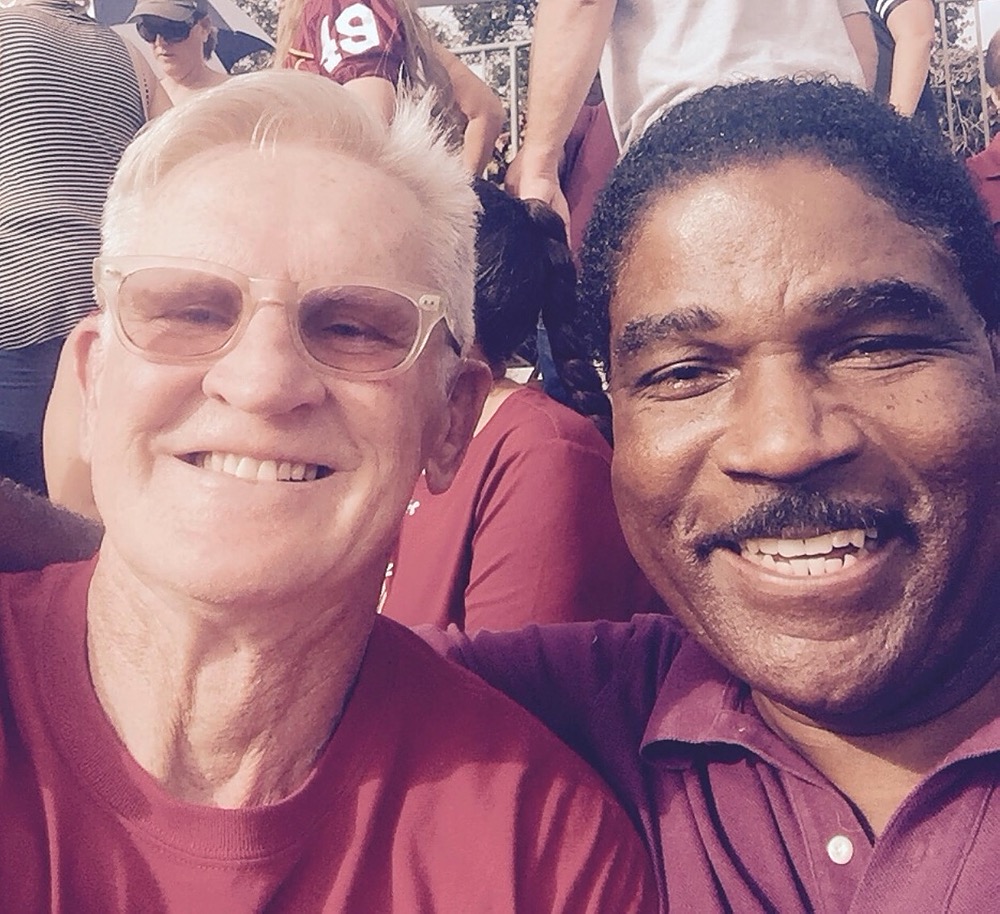 Harry Wright
January 13, 2022
My deepest condolences. Sam was a teammate and friend.
Harry Wright
January 13, 2022
My deepest sympathy is extended to the family. Those we love are never gone, as we have their memories in our heart. May God grant you all comfort and peace.
Hermenia Rodgers
Family
January 12, 2022
Our sympathies to his family!! We met him through Little League Baseball, with his son Justin, and Sam was just so nice!! We'd see him walking on the Strand for years after and always a cheerful hi and how you doing.....then always asked...."How's Jeff?" Thinking of others all the time!! So very sorry for your loss! Steve & Peggy Nisen
Steve & Peggy Nisen
January 11, 2022
Thank you Sam for being a great role model for us at Banning High. Your education, work, family life is remarkable. God Bless
Danny Garcia
School
January 10, 2022
Love and condolences to friends and family of Samuel Reece. When I think of Samuel I remember his hardy laughter and watching him play sports with his brothers at Banning Park. In school, wherever he focused his mental energy he excelled. When he told friends and relatives he wanted to attend college and law school we knew it would become a reality. Sam loved to travel and showed no fear when he and some friends hitch hiked across America. Sam chose the path less traveled and I celebrate his life. Throughout all of his travels and endeavors God protected him until finally it was time to call him home.
Patricia Stephens Pride
Family
January 10, 2022
I am very saddened by Sammy no longer being on this earth. I knew him at Banning and went to both the prom and grad night with him. Always had a special place in my heart. A great guy that I always considered a friend for life. I will miss him dearly. Condolences to his family and everyone who knew and loved him.
Margo Berdanis
Friend
January 10, 2022
Our senior yearbook pictures are next to each other. He and I had a great school friendship and shared a sense of humor that I think allowed us to navigate successfully the crazy time we were trying to figure life out. Though we never corresponded, I often thought of him and our "old college handshake" that had everyone who saw the antic convinced we were totally crazy. My deep and heartfelt condolences to the whole family. (I did follow Danny´s USC & NFL careers)
Eric(Rick) Ravitz. Banning 1970
January 9, 2022
Intelligent, funny, athletic, leader, and most of all is the love for people. These are just the few positive adjectives that "Sammy" possessed. From the fun days that began at Banning Park in our youth with our future everlasting friends, thru Banning Hi School and playing football, it was always fun to play with you. But, I didn´t look forward to play against you. You were always the best. Thank you Sammy for making everyone around you a better person. May the good Lord be with you and your entire family. You and your laugh will never be forgotten.
Robert Pacheco and family
Friend
January 9, 2022
My Deepest condolences
Cynthia Fonnesbeck-Larriva
January 7, 2022
To my long time friend sorry to hear of your passing my prayers and comfort to your family. Sam growing up together playing baseball and football were the best of times of our life we were always the best of how we played thanks for everything I will never forget you.
Jimmy Legaspi and family
Friend
January 7, 2022
I am so sorry to hear about Sam's passing. I met Sam through MCHS Football Boosters, I ran the MCHS Football Snackstand for over 25 years and Sam was our biggest supporter and cheerleader. Along with Priscilla & Rex Atwell, Sam and I ran the Mira Costa Football Boosters Tri-Tip booth at the MB Hometown Fair for more than 15 years His "secret" tri-tip rub and master grilling was a hit and enjoyed by many, so much so we had many repeat customers. In 2018, the Master Griller Sam Reese and his team (Priscilla, Rex and myself) hung up the aprons and Sam grilled our last tri-tip. We were voted the best Tri-Tip by the Hometown Fair Committee. We will miss you Sam! My thoughts and prayers are with his wife Judith and his family. Please keep me posted on any memorial plans.
Soledad Endara
January 7, 2022
My deepest condolences to the family. I was a classmate and teammate of Sam's at CMC. I was also his RA during his 1st year in school. He was a dynamic leader, an excellent student, and a superior athlete. But his greatest attribute to me was how he profoundly impacted those around him.
ARNE HENDRICKSON
School
January 7, 2022
This is truly sad news. Please post any memorial plans.
Claudia Valerie Gamio (Romero)
School
January 7, 2022
Our cousin Sam will be missed. His loud and joyous laugh is remembered with sadness but also with gratitude as a fond memory of good times shared in his presence. To his immediate family, especially Sam´s children, we extend prayers for God´s strength and peace. And it is with love that our deepest sympathies go out to you all.
The Merrill Family - Sheila, James, our son Jordan, his wife Amy and our so
Family
January 6, 2022
So sorry to hear about Sam passing away. I use to see him when he was exercising on the Strand in Manhattan Beach many years ago. Such a pleasant man. Last time I saw him he was cooking at the Hometown Fair for the Mira Costa football boosters I think. Would love details of any memorial planned.
Rose Osten
Friend
January 6, 2022
Showing 1 - 22 of 22 results