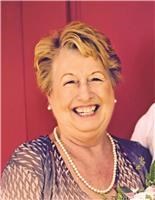 "Trish" was beloved by All. Loving Wife, Sister, Mom, Aunt, Daughter and the best Friend anyone could ever have. After a long 2 years of battling ALS, with her dear Husband by her side, Patrick Haynes, she succumbed to the disease last Summer.
Trish was preceded in death by her husband of 16 years, James McCoy, and her parents Blanche and Leif Mikkelson.
Trish was the first born of three in Westby, Wisconsin to Blanche and Leif Mikkelson. Her father was a successful business owner and in his later years became Mayor of Westby, a small Norwegian community near La Crosse, WI. Her mother was a housewife when the kids were young, then she was a teacher and worked for the Westby School District. The family were and still are avid skiers. Trish's Grandfather and several of his Norwegian relatives were founding members of the Snowflake Ski Club. They moved here from Norway and started the ski club in Westby. She was very close to her family and mid west roots, as well as her extended family in Norway, where she often visited and would plan big family reunions.
Trish attended the University of Wisconsin at Madison and Northwestern in Chicago for her undergraduate and graduate degrees in Accounting. As a Certified Public Accountant, she lived in Chicago for a short period and then moved to Sunny Southern California in her 30s to escape the cold and further her career in Finance and Accounting, with an emphasis in Health Care. At PricewaterhouseCoopers she met and married Jim McCoy, and they were married for 16 years before his passing in 2008.
The trailblazer she was, she partnered in a health care consultancy company, called Phoenix, based in Manhattan Beach and continued to consult even after her retirement. She was active in her charity work with South Bay Family Healthcare where she was Board Chair, Treasurer for the Neptunian Society and Treasurer for Christ Church Episcopal.
Trish was an avid traveler, chef (learned from her mom) and entertainer. She loved to be with friends and family and would host beautiful family gatherings, that we all cherish. She loved Europe as much as the Desert, as well as Hawaii. There would always be a trip or two or three on the calendar.
In 2016 she met, then married Patrick Haynes, and was known to his children as "TrishMa". The family grew and their adventures took them on Cruises, France, Italy (which became their favorite spot), Norway, Maui, and of course Wisconsin. In late 2018, she was diagnosed with ALS, and with grace and humility passed away in August 2020.
Trish or "Nana" as she was lovingly called by her grandchildren, is survived by her husband, Patrick, Son Michael, Daughter Maria, Grandchildren: Ella, Henry, and Izzy. Brothers Steve (and Kelly) and Peter (and Beverly) Mikkelson, and niece, Sydney (and David) Koop and great niece Kaiya, and great nephew, Stratton; and stepdaughters Tammie, Linda (and Danny), Karen (and Luis), Trish (and Patrick) and stepsons Brian (and Laura) and David, plus grand and great grand kids. And countless Friends and Family around the world.
We will miss her beautiful smile, her kindness towards all, her meticulous planning (often with excel spreadsheets!) for lots of fun events, her delicious cooking, but most of all her laughter and friendship.
You are forever in our hearts.
Published by The Beach Reporter on Jun. 3, 2021.
To plant trees in memory, please visit the Sympathy Store.
MEMORIAL EVENTS
To offer your sympathy during this difficult time, you can now have memorial trees planted in a National Forest in memory of your loved one.
MAKE A DONATION
MEMORIES & CONDOLENCES
0 Entries
Be the first to post a memory or condolences.