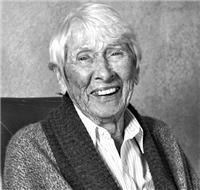 BORN
1919
DIED
2021
Marguerite (Peggy) Hogan, a longtime resident of Manhattan Beach, died in her home on the morning of September 2. She was 102 and lived independently all her life. A gifted artist, she was equally skilled at painting and woodworking.

Peggy was born March 2, 1919 in Indian Orchard, Massachusetts. One of five girls, (Esther, Irene, Helen, and Mildred) she was a tomboy in her early years, playing ball with the neighborhood boys. Ambidextrous, she could throw, paint and write equally well with both hands.

She moved to Brooklyn, where she received her nursing degree from Brooklyn Hospital Nursing School. It was there that she met John Hogan, a Brooklyn native. They were married September 5, 1943, a marriage that lasted until John's passing in 2001. They had four children together-Tina Adams, Tim Hogan, Tom Hogan and Michael Hogan.

Peggy spent the first half of her married life as 'a military wife', meaning she had to adjust to the ever-changing dictates of John's assignments, including long-term postings in the Philippines and Germany. In one four-year span, the family had to move four different times, with Peggy coordinating every aspect of each move. Once the children were grown, in 1971 she and John moved to Manhattan Beach, where they lived the remainder of their days.

Peggy was an active volunteer. Once all four children were in school, she worked with mentally challenged kids. Later, when the family moved to Manhattan Beach, she was involved with two organizations that worked with those suffering from AIDS.

Peggy was active up until her final days. Even into her 90s she went to the gym every day, as well as walks on the pier and Strand. During her last year she was a regular visitor to Polliwog Park.

In addition to her four children (above), Peggy is survived by five grandchildren and three great- grandchildren. She lived a long and productive life and will be missed.
Published by The Beach Reporter on Sep. 30, 2021.
To plant trees in memory, please visit the Sympathy Store.
MEMORIAL EVENTS
To offer your sympathy during this difficult time, you can now have memorial trees planted in a National Forest in memory of your loved one.
MAKE A DONATION
MEMORIES & CONDOLENCES
0 Entries
Be the first to post a memory or condolences.