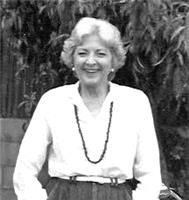 Lucile was born on a Minnesota farm
September 2nd 1921 and passed away peacefully January 7th 2021, just 8 months short of turning 100!! She was one of 6 children born to Swedish immigrants Nathaniel and Nannie Larson. Lucile was very proud of her Swedish heritage and had many stories to tell of life growing up on the farm.
After high school she eventually moved
west and began her adult life in northern California. She helped start, and was a partner in a printing business, and then worked at the Courthouse in Oakland. It was there she met her future husband, Dan Nisen. They moved to Southern California in 1952, ultimately finding a home in Manhattan Beach where they welcomed their first child, Janet, followed by Steven in 1955, and Jack in 1959. Their marriage ended in 1968, and Lucile stayed in Manhattan Beach as she embarked on a new journey. She held several jobs, including briefly owning a small bar in Torrance. She used the skills earlier gained in the printing business to become a printing technician at El Camino College, where she stayed for the next 17 years.
After retirement, she found spiritual peace as a faithful member of the South Bay Jehovah's Witness Congregation. She dedicated many hours of service to their ministry. When active participation was no longer possible, she looked forward to the weekly visits and scripture study with compassionate congregation members. She was comforted by the Bible's resurrection hope.
Throughout her life Lucile enjoyed gardening, a variety of well loved pets, travel and all the arts, especially classical music. Her greatest joy, by far, was spending as much time as possible with her family. Lucile is survived by daughter Jan Grossberg (Jerry), sons Steve (Peggy), and Jack; grandchildren Lauren Hebert, Greg, and Allison Grossberg, Jamie Vassar, Jeff Nisen, Liza Nisen, great grandson Lucas Vassar, and several nieces and nephews. She was a devoted Mother, loving Grandmother, and a dear friend who will be deeply missed!
Published by The Beach Reporter on Jan. 13, 2021.
To plant trees in memory, please visit the Sympathy Store.
MEMORIAL EVENTS
To offer your sympathy during this difficult time, you can now have memorial trees planted in a National Forest in memory of your loved one.
MAKE A DONATION
MEMORIES & CONDOLENCES
1 Entry
What a pretty lady.
Lila
July 4, 2021
Showing 1 - 1 of 1 results