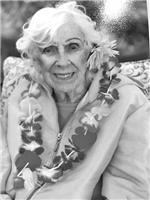 Joan Balzer was born March 29, 1929, in Barrie, Ontario, Canada. After graduation from nursing school, she traveled with fellow nurse graduates to Vancouver, British Columbia where she found work as a nurse. She then decided to explore job opportunities in California.

She worked for three years as a nurse at Good Samaritan Hospital in Los Angeles.

Joan married Jack Balzer in 1956 and moved to Hermosa Beach where they purchased a home. She also worked at Cedars of Lebanon Hospital, now known as Cedars Sinai Medical Center. They raised three children: Margaret, Michael and Todd Balzer. After her children were in high school, she worked as a Red Cross nurse and at Inglewood Hospital. Joan began volunteering at South Bay Hospital at the surgical desk in 1978, later becoming part of the South Bay Auxiliary team at Beach Cities Health District. She loved volunteering as she felt the community had been good to her and she wanted to give back.

Joan traveled with Jack before he passed away in 2002, on trips to Australia, New Zealand, Spain, Costa Rica and home to Canada to visit her family.

Knitting and baking pies were some of Joan's passions. She has five grandchildren with whom she was involved with in their young years. Joan was an active parishioner at American Martyrs Church for over 50 years.

When Joan resided in Manhattan Beach she took Tai-Chi weekly classes and walked twice a week with the Walkers and Talkers group that meets at the Hermosa Beach pier to walk the strand. She moved into a senior living facility in 2018. Throughout her life Joan loved taking care of people and even this last year liked to help the nurses at the facility where she resided.

Published by The Beach Reporter on Dec. 9, 2021.
To plant trees in memory, please visit the Sympathy Store.
MEMORIAL EVENTS
To offer your sympathy during this difficult time, you can now have memorial trees planted in a National Forest in memory of your loved one.
MAKE A DONATION
MEMORIES & CONDOLENCES
0 Entries
Be the first to post a memory or condolences.