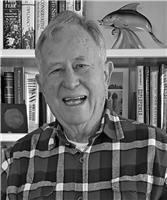 Jerry Adams Saunders, a long-time resident of Manhattan Beach, died at his home Thursday, 16 September 2021. Jerry, the son of Nelson Madden Saunders and Marguerite Frances Adams, was born in Los Angeles, CA, 23 February 1928. He grew up surrounded by the love of his parents and maternal grandmother in Cheviot Hills. During his childhood and teen years, he formed friendships that would last a lifetime. In 1942 Jerry and 17 other Senior Boy Scouts participated in a 98-mile pack trip and climb to the top of Mt. Whitney, the highest peak in the continental United States.

Jerry graduated from University High School in 1945 and was accepted at USC, where he played on the junior varsity football team. After his freshman year Jerry served 15 months in the Army from 1 October 1946 to 6 January 1948. Upon his return from Yokohama, Japan in 1948, he enrolled in the College of Business Administration at USC and joined the Kappa Alpha fraternity. During the summer of 1949 Jerry sailed from New York City to Cherbourg, France, on the S. S. Queen Elizabeth for his "Grand European Adventure," which culminated in a climb to the top of the Matterhorn near Zermatt, Switzerland.

In 1951 Jerry graduated from USC and then went on to get his master's degree. Initially he worked for his father in the N. M. Saunders Real Estate Firm but soon struck out on his own. He worked for a company that built low-income housing in South Central Los Angeles and later worked for Colwell Mortgage, which took him all over the country. He joined the Jonathan Club and the Junior Chamber of Commerce and occasionally taught evening real estate classes at USC. He was a staunch supporter of the USC Trojan football team, having season tickets until the day he died.
On 9 Jun 1968 in Los Angeles, Jerry married Dawn Simpson. They were married 14 years until their divorce in 1982. In 1971 Jerry built a home in Manhattan Beach and quickly became an integral part of the tight-knit community. His next-door neighbor, Veronica McLaughlin, would become a life-long dear friend. He attended the St. Cross Episcopal Church in Hermosa Beach and served as an usher. Jerry became very involved in the surrounding area, serving as President of the El Segundo Chamber of Commerce, as Vice President of the South Bay Area Chambers of Commerce, and as a long-time member of the Board of Directors of the Schriever Chapter of the Air Force Association.

Jerry started with Continental Development in 1980 as a Project Coordinator. He was named Vice President of Planning in 1989 and was primarily responsible for obtaining government entitlement for the company's Southern California real estate projects. He retired from CDC in late 1998 but continued his association with the company until a few years ago as a part-time consultant on a project-by-project basis, as well as representing CDC in various community and business organizations.

Starting in 1990 Jerry became involved in efforts to keep the Air Force from closing Los Angeles Air Force Base. These efforts on behalf of Continental Development Corporation and the SBACC continued each time Congress authorized a Base Realignment and Closure Commission (1991, 1993, 1995, and 2005). Needless to say, his efforts were successful, since the base is still operating in El Segundo.

Jerry was a life-long Republican, a sailor, an avid skier, and a world traveler. He loved to read and enjoyed playing Five Straight with friends. He was outgoing, funny, intelligent, generous, honest, a bit stubborn, always willing to help, and dearly loved by his friends. He had a never-ending supply of great stories from his past to share with his friends. We will all miss his company, his laughter, and especially his smile.