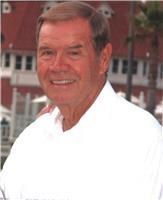 BORN
1939
DIED
2021
Jeffrey Richard Plough
Beloved long time Manhattan Beach resident, Jeffrey R. Plough, passed peacefully with loving family by his side on January 13th, 2021. Jeff was the son of Harry and Eleanor Plough and was born on February 26th, 1939. He and his sister, Nancy, enjoyed their happy childhood while raised by their wonderful parents in Manhattan Beach, CA.
As a young boy, Jeff served as an Altar Boy at American Martyrs Church. He attended American Martyrs School and Mira Costa High School where he made many lifelong friends. Jeff was a standout football player at Mira Costa High and it was there that he met the love of his life, the lovely cheerleader, Diane Attwood.
Jeff was a graduate of Long Beach State University and earned his Masters
Degree at University of Southern California. Jeff and Diane were married at
Wayfarer's Chapel in Palos Verdes in 1960. As the newlyweds started their life
together, Jeff graduated from the Sheriff's Academy and began a long, outstanding, career with the LA County Sheriff's Department. Jeff as promoted to many leadership roles in the department and was respected by all for his strength,
wisdom, and integrity. He was serving as Head of Operations for the Carson sheriff station when he retired from his 35 year career.
Jeff and Diane raised three active, athletic sons, Greg, Steve, and Tim. As
devoted parents, they were involved with all of their son's school and sports
activities. Jeff served on many Little League and Pony League boards, but his
favorite roles were the times he was coach and mentor on his sons' baseball teams. He won at every level including the major league Tigers who won the mayors cup. He was very proud of the boys he coached on what he called "the famous 1977 Little League All Star Team". This team was just one game shy of the World Series. Most important to Jeff were the solid friendships made with the teams of players and their families.
As a lover of sports and fitness, Jeff was an avid 10K runner and faithfully worked out with his many buddies at the Spectrum Club. He was a member
of the South Bay Trojan Club. For over 40 years, Jeff and Diane enjoyed their USC season tickets with friends and family and traveled to away games. They also enjoyed traveling worldwide with friends and enjoyed their desert get away home. Jeff was a lover of all types of music, classical, country, bluegrass, rock etc ... But his favorite song that would come blasting through his speakers was the USC Fight Song! He especially loved teasing extended family members who were avid UCLA Bruin fans.
Jeff was a loving husband to his adoring wife, Diane, for over 60 years. He was a devoted family man and loving father to his three sons and cherished spending time with his grandchildren whom he adored. Jeff was preceded in death by his parents, Harry and Eleanor Plough. He is survived by his wife, Diane, Sons, Greg (Audrey) Plough, Steve (Roxann) Plough, Tim Plough, seven grandchildren, Ashley, Jason (Lindsey) Plough, Alyssa, Trevor, Danielle, Matt, Justin "JD" Plough and two great grandchildren Nixon and Olivia Plough. He is also survived by his sister, Nancy (Plough) Callahan and his Attwood family in laws, Ralph, Janet, Ken, Debbie, Rob and their families who considered Jeff a true brother and dear friend. He was adored as Uncle Jeff by his many nieces and nephews.
Heaven has gained one of the kindest, finest gentlemen.
Funeral service will be held at American Martyrs Church on Saturday, April 17th at 10:00 a.m.
To plant trees in memory, please visit our Sympathy Store.
Published by The Beach Reporter on Feb. 27, 2021.
MEMORIAL EVENTS
Apr
17
Funeral service
10:00a.m.
American Martyrs Church
, CA
MEMORIES & CONDOLENCES
2 Entries
To Diane, Greg, Steve and Tim,
My deepest condolences to all of you. Diane, I can't imagine going shopping without meeting the two of you in the market.
Greg, Steve and Tim, I remember each of you at Ladera. I also remember lunches for top math scores. Your children will miss their amazing Grandfather. I know the three of you will take good care of your beautiful Mom.
You are a very special family and I would certainly be at Martyrs if the circumstances were different.
With love, Stana Edgington
Stana Edgington
Teacher
March 9, 2021
My deepest condolences to The Plough Family. Jeff was one of the finest people I’ve had the privilege to know, representing the best of what growing up and living in Manhattan Beach had to offer. Jeff, like the rest of you, are family to me.....
Matt Simkins
Friend
March 6, 2021
Showing 1 - 2 of 2 results